What Is Going On With Turkey? 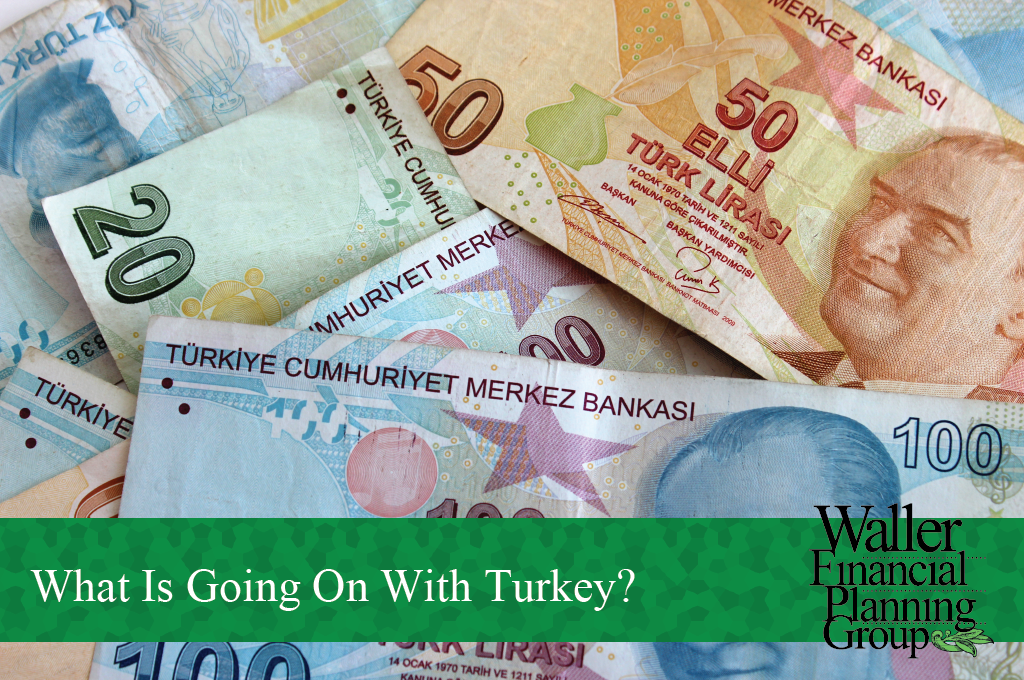 What is going on in Turkey, and why is it affecting markets around the world?  Since the start of the month, the Turkish stock market index is down more than 20%, as are Eurozone bank stocks. The European Central Bank is concerned about the exposure its banks have from Turkey due to exceptionally large loans to Turkish businesses. The MSCI Emerging Markets Stock Index is down over 10% for the year, with a majority of that drop occurring in August. The Euro, along with several non-major currencies were down sharply, including the South African Rand, Argentine peso, Russian ruble, Hungarian forint, Polish zloty, Brazilian real and Mexican peso.

Although the U.S. and Turkey have been allies for more than 50 years, there have been tensions dating back to the Iraq War related to disagreements on the extent of Turkey’s involvement in the war. Earlier this year, tensions flared up again due to the situation in Syria, which borders Turkey. In an attempt to eradicate the Islamic State from Syria, the U.S. backed and armed the YPG. The U.S. considers the YPG to simply be Kurdish fighters, while Turkey insists these Kurdish fighters are part of a terrorist organization called the PKK. The PKK has been causing problems within Turkey’s borders. This most recent crisis was triggered when Turkish officials imprisoned Andrew Brunson, who is an American evangelical pastor. They accused him of being a spy and an instigator of the attempted coup of the Turkish government last summer.

The Turkish government has sought the extradition of a Turkish imam, Fethullah Gulen, whom they insist was the mastermind behind the attempted coup. He has lived in the U.S. since the late 1990’s, and the U.S. has continually rejected Turkey’s request. Since Brunson’s arrest, U.S. diplomats have been calling for his release. They have been steadfast in their denial of any nefariously spying activity by Brunson and indicated he is on trial due to his faith and so he could be used as leverage to acquire Gulen. After negotiations for Brunson’s release failed, the Trump Administration surprised everyone, and especially Turkey, by imposing economic sanctions against a fellow NATO member.

These sanctions were clearly the trigger event for the collapse of Turkish stocks and the Turkish currency, the Lira. Some analysts believe Turkey was long overdue for some sort of economic trauma. Turkey has been compared to Greece for having amassed one of the largest foreign debts in the world, as its banks and large companies have borrowed heavily. Investments in Turkey by foreigners have dramatically slowed, in large part due to the country’s authoritarian government meddling in monetary decisions. Those concerns were exacerbated when, in response to the current crisis, Turkish president Recep Tayyip Erdogan squeezed central bank liquidity.  In just one day, he doubled the interest rate cost and then, by fiat, changed the rules so that speculators were no longer allowed to sell their Lira for Dollars or Euros in what is known as currency swaps. Banks were forced to stop lending Lira or renew any existing contracts. Additionally, Erdogan doubled Turkish import tariffs on passenger cars, placed a 140% tariff on alcoholic drinks, and significant tariffs on tobacco, cosmetics, rice and coal. In a subsequent speech, the Turkish president called for a citizen boycott of U.S. electronic products.

Is there any way out of this mess? The Turkish government is backed into a corner; they do not want to look foolish or weak by releasing Brunson. They know that if, or when, they do, President Trump will do a very public, potentially humiliating, victory dance on the world stage. Unfortunately for Turkey, the U.S. is in a significant position of leverage over their economic well-being. Although Turkey just received some financial assistance in the form of a $15 billion loan from Qatar, they only way they can stop a continued and long-term crisis is to release Brunson.