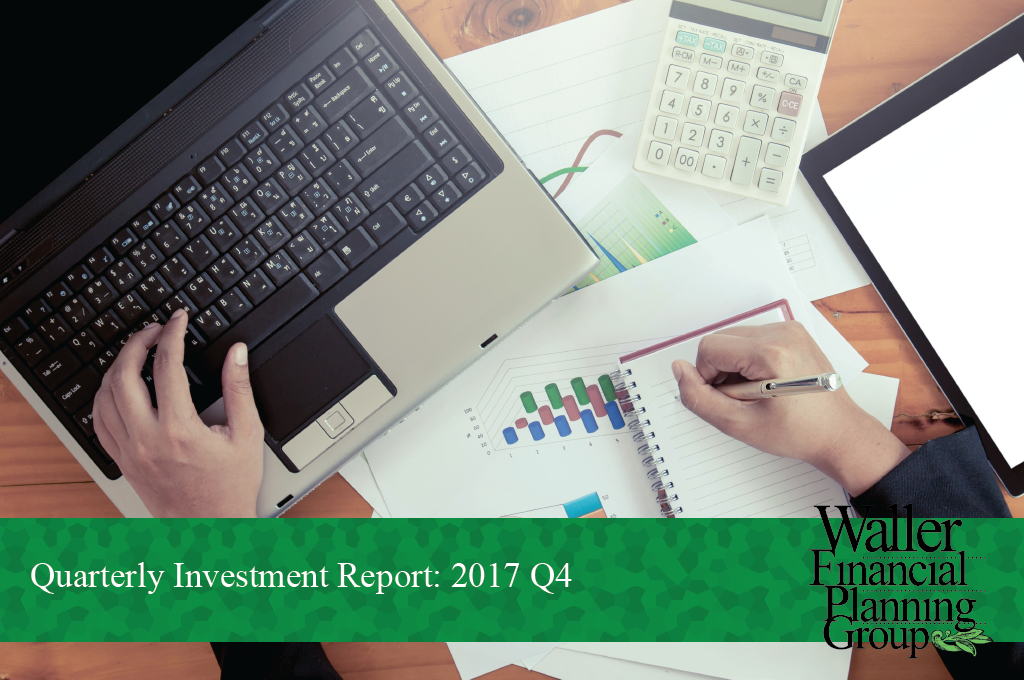 Happy New Year! It was certainly a happy year in 2017 for the investment markets. As we close out the fourth quarter and year, we are pleased to report the stock market investment returns exceeded our expectations. The quarter saw equities post strong returns again. Large capitalization U.S. stocks led the way, posting a quarterly return of 6.64%. Foreign stocks followed, returning 4.23% for the quarter. Small capitalization U.S. stocks were up 3.34%. Conversely, it was a tough quarter for fixed income, or bonds. Aggregate bonds were up 0.39% for the quarter, while municipal bonds fared better, posting a quarterly return of 0.75%[1].

As was the case in 2016, all of the major investment indexes we track finished in positive territory in 2017. For the first time since 2012, foreign stocks bested U.S. stocks. For the year, foreign stocks were up 25.03%. Large capitalization U.S. stocks were up 21.83%, while small capitalization U.S. stocks finished up 14.65%. Although considerably lower than equities, we were pleased with the return of municipal bonds, as they were up 5.45% for the year. Aggregate bonds, or core U.S. government and corporate bonds, posted a return of 3.54% for the year[2]. Considering the Federal Reserve (Fed) raised interest rates three times in 2017, and the overall investment universe increased its desire for risky assets, we are pleased with the performance of the bond market. There were considerable headwinds present, and yet, bonds delivered a return that was almost double the inflation rate.

In reflecting back on 2017, we were more surprised at the lack of volatility that was present than the high stock market returns. The CBOE Volatility Index, which is considered a general fear index, decreased by more than 20% during the year. The Index started in 1990, and during 2017 we recorded 9 of the 10 lowest readings of all time. Not one time over the course of the year did the market fall more than 3% from a previous high. Since 1980, the intra-year average drop is almost 14%[3]. There were only four days during 2017 that the market dropped by 1% or more, which is the fewest since 1964[4]. The year ended up being extremely docile from a loss standpoint, which is extremely rare. This was surprising considering there were plenty of events that should have bothered the market during the year, such as the geopolitical flair ups with North Korea and the on-going issues in the Middle East.

The current bull market run we are in has lasted 105 months, and could very well pass the longest recorded run of 113 months, which started in October 1990[5]. Bear markets are defined as a decline of 20% or more, while bull markets can be defined as the expansion between bear markets. Currently, we believe there is a fair amount of optimism in equity markets, and a good portion of that optimism is warranted. The concern is when optimism becomes euphoria. Historically, investors tend to rush into the market near the end of a bull run out of fear they will miss out and a belief that things will continue to go up. We are not at a point of euphoria and there is justification for the optimism.

Although we are concerned there are some longer-term structural issues related to the corporate tax change, we expect there to be a short-term bounce in stock returns. The U.S. economy continues to be strong, companies continue to post better-than-expected earnings, unemployment continues to be very low and consumer confidence remains fairly strong. All of these are reasons why some near-term optimism is warranted.

At the December meeting, the Fed elected to raise interest rates a quarter of a point. This was the third time in 2017 they raised interest rates. In reviewing their minute notes, it was interesting they mentioned high stock prices and extremely low volatility as something they are watching, as they normally refrain from commenting on stock market valuations. They also reaffirmed their plan to increase interest rates a few times again in 2018, with many believing a quarter-point increase will occur in March. While we would have preferred to see President Trump nominate Janet Yellen for a second term, we were relieved to see current Fed Governor Jerome Powell nominated. Over the years, Powell has worked closely with Yellen, and we expect to see consistency and stability in the Fed’s management of our monetary policy.

With this current expansion getting long in the tooth, we are growing more concerned with what can go wrong than what might go right. While we believe 2018 will be a good year, we are concerned with what lies just ahead. Some policies are being championed by the current administration that could be unfavorable for the continued growth of the economy. We believe that restricting trade will be bad for the economy. Levying tariffs on goods from other countries only hurts U.S. consumers, and the retaliatory nature of such actions by other countries could also hurt U.S. companies that export goods and services. While immigration reform is necessary, having a policy that will reduce the labor force will be harmful for economic growth. We are proponents of lower personal and corporate tax rates, but we are concerned that the recently enacted cuts may have gone too far. We question the ability of the economy to grow at such a rate to be able to pay for the increased deficit. Much of the success of the tax cut will be dependent on what businesses do. Will they hire more workers, purchase more equipment, acquire other companies, increase wages or simply buy back their own stock and pay higher dividends? Like many things, we are going to have to watch to see how this plays out.

Although we expect to see stock returns continue to increase in the near term, neither we, nor anyone, can predict with any significant reliability how the year will unfold. We believe in having a disciplined process of investing, not one that bets on possible outcomes and hopes to get lucky. Trying to time the markets is foolish. The only thing that is certain is markets go up and they go down. It has been almost nine years since the last bear market, although it feels like the 08-09 financial crisis was just a short while ago. We cannot say when the next bear market will be or when the next recession will start, but we are certain there will be one. That is why we focus on understanding your cash flow needs and personal situation to make certain we have your investment portfolio allocated correctly. Paramount in our philosophy is that successful investing is achieved by making certain the investment allocation aligns with your financial plan.