The Easier, But Less Traveled, Path To Financial Independence 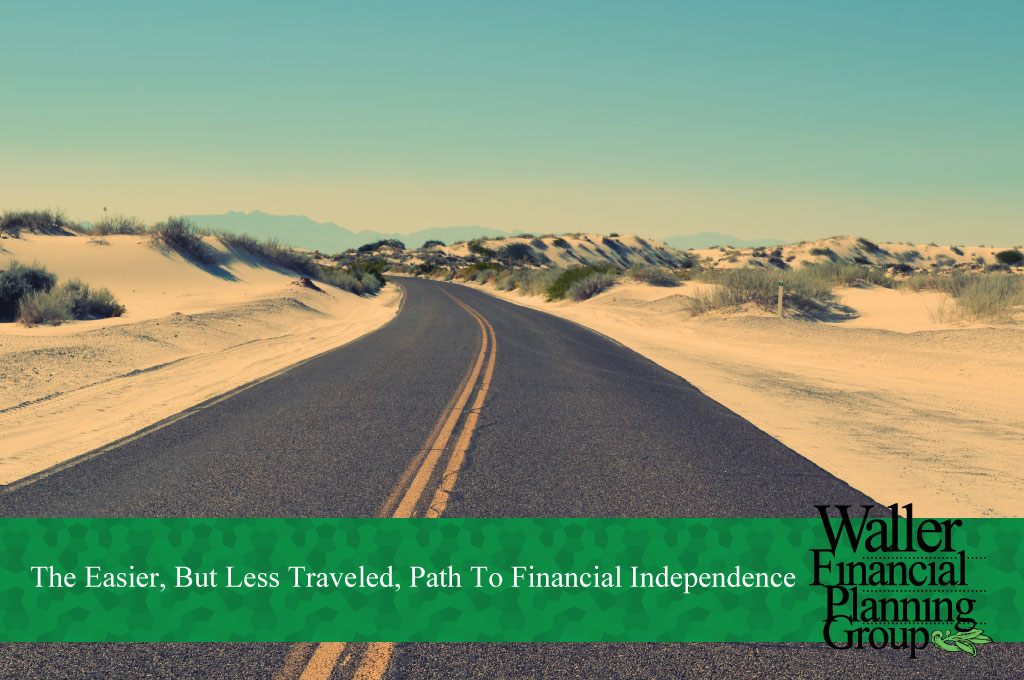 Many young people put off the thought of saving for retirement, because they believe they can make up the savings later in life when their income is higher. This is a tremendously flawed belief, and it puts the average working person significantly behind in retirement. Those that are nearing retirement, ages 55 – 64, have a median value of $103,000. If you consider the average life expectancy for a 65-year-old is about 20 years, it will be extremely difficult to outlive your savings. If you earn 7% every year on your retirement savings of $103,000, you will receive $810/per month for the next 20 years. Unfortunately, that probably will not cover your monthly expenses, and it does not keep up with inflation. By the end of the 20 years, the $810 will be equivalent to about $390 after adjusting for inflation.

So, what is a person to do? One can choose to take a different path – the easier but less traveled path. Taking this path usually means making a few more sacrifices earlier in life, but you gain more than you give up later in life. The key to financial independence is to start saving early and stay disciplined.

The average person’s peek earning years tend to be in the second half of their working career. A study shows that a person’s average pay raises are much greater in the beginning of their career. The study, released by the Federal Bank of New York shows that the average person’s earnings growth starts to flatten out by mid-40s and actually turns negative after 55. Simply put, you get your largest pay raises, as a percentage, early in your career. By the end of your career, you will probably see 5-10 years of slight pay decreases.

Early in our working lives is when we can build sound financial behaviors that will become the cornerstone of financial independence. Again, start by saving early and often. The moment you can begin investing into a retirement savings plan, you should put aside 15-20% of your salary. This might sound like a lot, but it is barely enough. One tip I offer young people is to save at least 50% of all their pay raises. This is extra money you are not used to having, so saving it won’t make an impact on your budget (except for your retirement savings, of course.) A major mistake people make is allowing their spending habits to increase with their income.

The other benefit of saving early is the power of compounding returns. As Albert Einstein famously quipped, “Compound interest is the eighth wonder of the world. He who understands it, earns it…but he who doesn’t…pays it.”

A second tip I give to young people is focusing on getting debt-free as soon as possible. You should never carry balances on high interest credit cards. The average indebted person has over $15,000 outstanding on credit cards. With an average interest rate of 15%, that’s $2,250 going toward interest every year. Just imagine if you saved that into your retirement savings plan. The average outstanding mortgage debt is about $156,000, and the average outstanding student loan debt is about $33,000. I typically tell young people to spend the first 10 years of their working careers paying off all debt, including student loans, before considering buying a house. A major goal is to be debt-free by retirement.

Start saving early, increase your savings as you receive annual pay raises, live within your means, and get debt-free as soon as possible. Those are the keys to gaining financial independence, and the earlier you start, the easier it is.