The Fed Increased Interest Rates – So What! 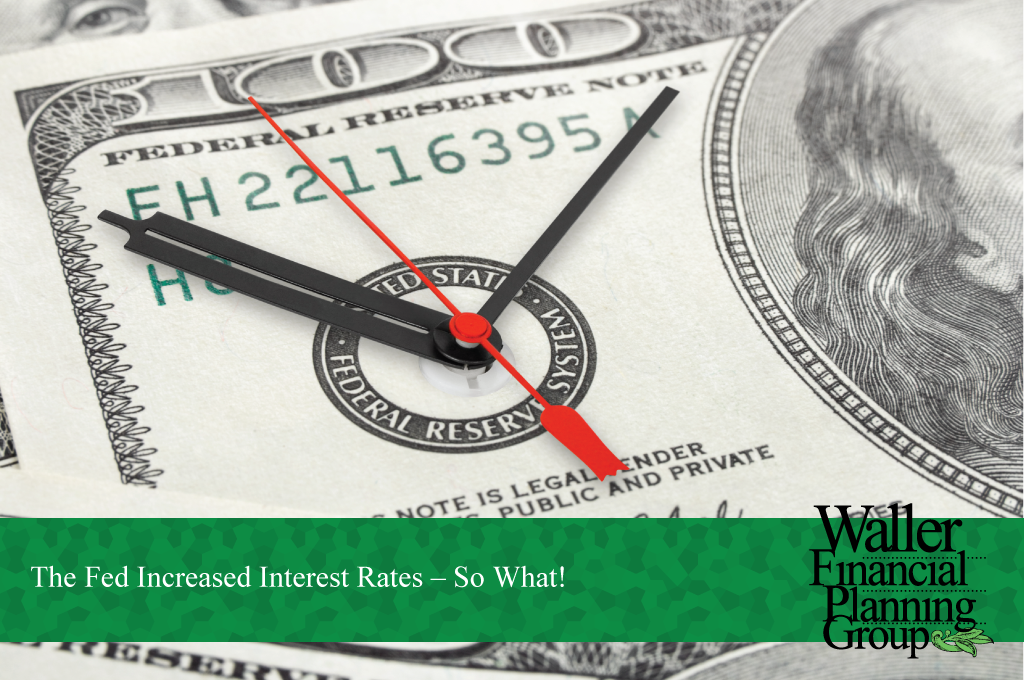 On Wednesday, the Federal Reserve increased the federal fund’s interest rates by 0.25%. This was the first time in a year the Fed increased rates and only the second time since the Great Recession. The Fed has been fairly transparent in its intent to increase rates, so it was not a surprise. The U.S. economy is humming along, the stock market is doing well and the unemployment rate has fallen faster than generally expected. Chairwoman Janet Yellen suggested in her speech that inflation had increased, and unemployment was lower than the Fed had been expecting as the two biggest factors in moving the key interest rate level from 0.25% to 0.50%.  At 0.50%, interest rates are still significantly below where they were compared to just 10 years ago. Before the financial crisis, the federal fund’s interest rates were at 5.25% in late 2006.

The market reacted more to Chairwoman Yellen’s points about expected future increases in interest rates than the actual 0.25% increase. She outlined the Fed’s intent to raise rates three times next year, which would continue to move rates to a “normal” 3% by the end of 2019. Whether any of that will actually happen is unknown, because after all, the Fed had previously outlined two or three interest rate increases in 2016. To their credit though, the Fed has been extremely data sensitive and made decisions based on current information.

The incoming administration has promised lower taxes and a stimulative $550 billion infrastructure investment. Due to the lack of understanding of how these two actions are going to impact the economy, Chairwoman Yellen explained the Fed will take a more cautious wait-and-see approach during 2017. It’s possible the tax cuts and infrastructure investments could trigger higher inflation more quickly than the Fed is anticipating. This would cause them to reactively adjust interest rate levels. Conversely, some have argued the economy will be able to accommodate this stimulus without requiring the Fed to use interest rates to offset the anticipated growth in the money supply.

The Fed has been one of the last remaining skeptics that the U.S. is out of the danger zone of falling back into recession. Its announcement acknowledged that sustainable growth in economic activity and low unemployment rate are positive signs for the future; however, bond investors might be less pleased, as higher bond rates mean that existing bonds lose value. The recent rise in bond rates is a fairly clear signal the long bull market in bonds is starting to slow down.

The Fed’s manipulation of the federal fund’s interest rate does not directly impact interest rates on other vehicles. The impact is much more subtle and tends to be somewhat slower than the immediate reaction in the stock and bond markets. The federal funds rate is the mandated minimum interest rate that one bank has to charge to another bank in order to loan money. Banks would loan money back and forth to each other because there is a law that mandates all banks to have a certain level of depository reserves each day. It is commonplace for a bank to loan another bank enough to meet this reserve requirement. Banks make money when they are loaning money out to consumers, so it would be understandable as to why a bank may not have enough in reserves.

Despite any headline you might read, there is no reason to change your investment plan as a result of a 0.25% change in a rate that the Fed charges banks when they borrow funds overnight. There is too much uncertainty surrounding the economic growth of the country to speculate as to what might happen with interest rates and subsequently investment portfolios.

There are two levers that can be pulled to influence the economy – fiscal policy and monetary policy. Fiscal policy is actions taken by the government, and monetary policy is actions taken by the Fed. We do not know if the incoming administration’s infrastructure stimulus plans and income tax cuts will have a positive impact on the economy; however, we recognize they will be impactful. How the Federal Reserve views them will be what determines the level of interest rates going forward.