Brexit Aftermath & What It Means For You 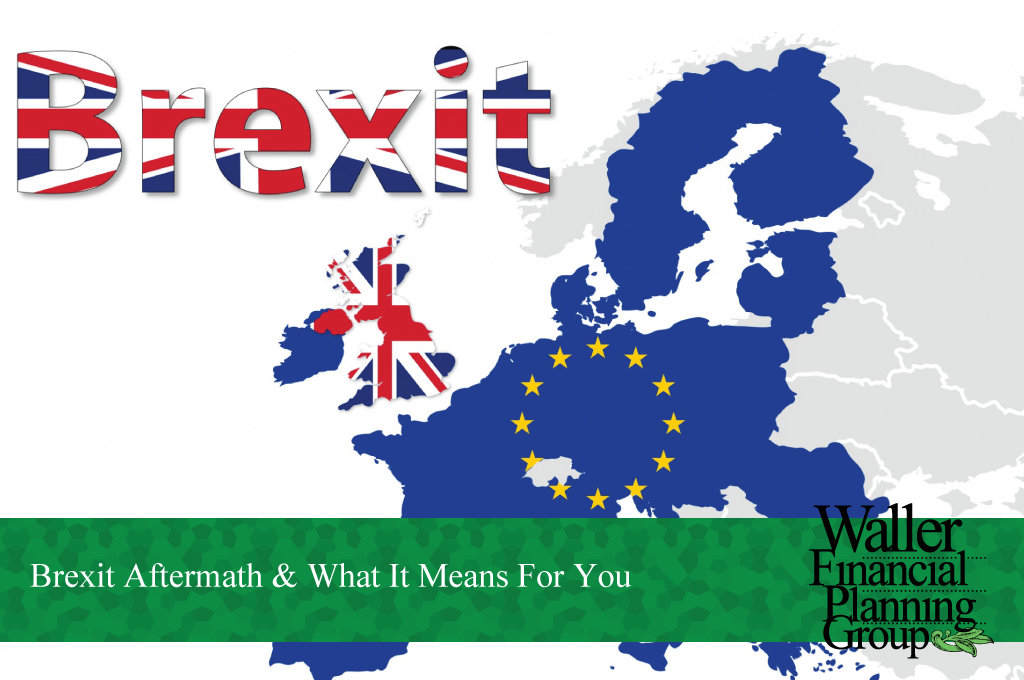 Yesterday’s vote by the British (UK) electorate to end its 40-plus year membership in the European Union (EU) seems to have taken the markets by surprise. Just yesterday, they rose in anticipation of a “stay” vote. Despite the surprise, the aftermath could not have been more predictable. The uncertainty of exactly how the EU and Britain will manage this complex divorce sent global markets reeling. London’s blue-chip index, the FTSE100, lost 4.4% of its value in one day, while Germany’s DAX market lost more than 7%. Britain’s currency, the pound sterling, is getting crushed, down 14% against the yen and 10% against the U.S. dollar.

The U.S. markets seem to be digesting the election outcome better than the rest of the world. The reaction among traders on U.S. exchanges seems muted based on the global sell-off, as the U.S. is only down about 3%, as you read this; however, nobody really knows if that is the extent of the fall or just the beginning.

The important thing to understand is that the current market disruptions represent an emotional roller coaster, an immediate panic reaction to what is likely to be a very long-term, drawn out, ultimately graceful accommodation between the UK and Europe. German companies are certainly not 7% less valuable today than they were before the vote, and the pound sterling is certainly not suddenly a second-rate currency. When the dust settles, people will see that this panicky Brexit aftermath was a buying opportunity, rather than a time to sell. People who sell will realize they were suckered once again by panic masquerading as an assessment of real damage to the companies in which they invested.

What happens next for Britain and its former partners on the continent?  Let’s start with what will NOT happen. Unlike other European nations, Britain will not have to start printing a new currency. When the UK entered the EU, it chose to retain the British pound, and that, of course, will continue. Stores and businesses will continue accepting euros, too.

On the trade and regulatory side, the actual split is still years away. One of the things you might not be hearing in the breathless coverage in the press is that the British electorate’s vote is actually not legally binding. It will not be until the British government formally notifies the European Union of its intention to leave under Article 50 of the Treaty of Lisbon—known as the “exit clause.” If that happens, Article 50 sets forth a two-year period of negotiations between the exiting country and the remaining union. Since British Prime Minister David Cameron has officially resigned his post and called for a new election that clock probably won’t start ticking until the British people decide on their next leader. For the foreseeable future, despite what you read, the UK is still part of the eurozone.

After notification, attorneys in Whitehall and Brussels would begin negotiating, piece by piece, a new trade relationship, including tariffs, how open the UK borders will be for travel and a variety of hot-button immigration issues. Estimates vary, but nobody seems to think the process will take less than five years to complete, and current arrangements will stay in place until new ones are agreed upon.

An alternative that is being widely discussed is a temporary acceptance of an established model—similar to Norway’s model. Norway is not an EU member, but it pays EU dues and has full access to the single market just as if it was a member; however, that would require the British to continue paying EU budget dues and accept free movement of workers—which were exactly the provisions that voters rejected in the referendum.

Meanwhile, since the Brexit vote is not legally binding, it’s possible that the new government might decide to delay invoking Article 50. Or Parliament could instruct the prime minister not to invoke Article 50 until the government has had a chance to study further the implications. There could even be a second referendum to undo the first.

The important thing for everybody to remember is that the quick-twitch traders and speculators on Wall Street are chasing sentiment, not underlying value and the markets right now are being driven by emotion to what is perceived as an event, but is really a long process that will be managed by reasonable people who aren’t interested in damaging their nation’s economic fortunes. Nobody knows exactly how the long-term prospects of Britain, the EU or American companies doing business across the Atlantic will be impacted by Brexit, but it would be unwise to assume the worst so quickly after the vote.

The markets will be volatile over the next few weeks as information is digested. Over the longer-term though, everybody will find a way to move past this event without suffering or imposing too much damage.