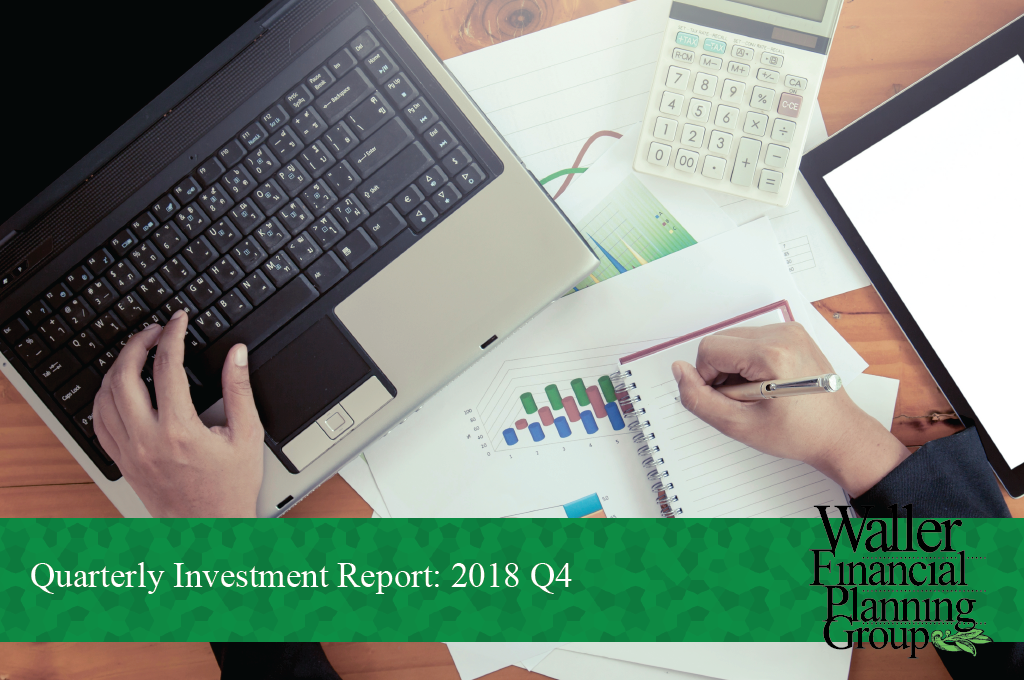 Through the first three quarters of 2018, we were well on our way to a solid year, in-line with expectations; however, many issues overwhelmed the markets, and we saw a dramatic and volatile movement. Fear and uncertainty took hold and asset prices dropped precipitously. During the quarter, small cap U.S. stocks were the worst performing asset class, declining 20.20%. While faring better, large cap U.S. stocks and foreign stocks sold off considerably too, dropping 13.52% and 12.54% respectively.  As we would expect, bonds provided some buoyancy to portfolios. For the quarter, aggregate bonds were up 1.64%, municipal bonds were up 1.69%, and foreign bonds were up 1.75%[1]. The markets sold off abruptly during December, leading to the worst December performance since 1931. It is also the first time since 1948 that the S&P 500 Index rose during the first three quarters of the year, only to finish in the red for the year.

Due to the disappointing market movements during the quarter, 2018 became the worst performing year for stock investing since 2008. For the year, large cap U.S. stocks lost 4.38%, while small cap stocks dropped 11.01% in value. Foreign stocks also dropped considerably, losing 13.79% during the year. There was not much to like about bond returns either.  Aggregate bonds closed basically flat for the year, posting a return of 0.01%.  Foreign bonds were down 0.84% for the year.  Municipal bonds fared better, posting a positive return of 1.28% for the year[2].

A number of issues surfaced during the quarter, and while individually none of them are a serious threat to derail the economy today, collectively, they have shifted sentiment more negative. The negative shift is related to the sheer number of issues we are facing, coupled with the significant amount of uncertainty that persists around the issues. These issues include Federal Reserve Bank (Fed) policy, European Union issues revolving around Great Britain’s exit, partisan political bickering, the government shutdown, economic slowdown in China, U.S. trade policy and U.S. fiscal policy. While we are concerned about each of these risks, they have yet to have much impact on the U.S. economy. Expectations remain that 2019 will see slow, but moderate economic growth. We continue to believe the probability of an impending recession is low.

As expected, the Fed raised its benchmark interest rate in December by a quarter point.  That marked the fourth increase this year. The Fed has been transparent and quite public in outlining their approach. Fed Chair Powell has routinely pointed out the Fed’s dependence on economic data for policy decision making; however, markets have been anxious and sold off in response to statements from the Fed that appear to be counter to the economic data4.

We continued to be concerned with U.S. trade policy, and the unintended consequences tariffs have on U.S. consumers. With that, we expect the trade issues with China will improve considerably during the first part of 2019. Even with improved trade relations between the U.S. and China, we are becoming more concerned with China’s slowing economy and the possible global impact it could have. Additionally, we are seeing signs that Japan’s economy is slowing too. China and Japan are the second and third largest economies in the world. These slowdowns are occurring at the same time as the European Union is having considerable issues with Great Britain’s exit. Great Britain is the fifth largest economy in the world, while Germany is the fourth largest. A concern we have is whether there is a global contagion that hits the U.S. as well.  Given the economic size and strength of the U.S., we expect the economy to show considerable resiliency to the global slow down. To put things in perspective, if California were a country, it would be the world’s fifth largest economy[3].

While we are living in an age of great political division and hyperpolarization, it is not clear how much, if any, impact this will have on the economy. Thus far, it has had little impact on the stock market. On average, the S&P 500 Index was mostly flat during all of the collective government shutdowns of the last 40 years.  Most shutdowns tend to be resolved quickly. With that, we are troubled by the annual budget deficits being run and the rate at which the national debt is expanding. Long-term, this is going to have a negative impact and elected officials are going to have to do something to counter this structural issue.

Despite the pessimism on these pages, we continue to be comfortable in the near-term economic outlook. The overall fundamentals of the economy continue to be stable. Inflation remains low and under control.  We continue to see companies produce profits, although we are beginning to see forward-looking guidance lowered. We also continue to have a robust job market, with unemployment at a 49-year low. As mentioned last quarter, we believe the economy is in the late stages of the expansion cycle, which remains attractive for investing. In reality, the abrupt market decline in the fourth quarter certainly makes stock valuations more attractive.

We have long held that no one can predict future stock market movements with any reliability. To this point in history, the market has recovered from previous sell-offs to move and moved to new highs. The real question is, how long will the recovery take? One of our responsibilities is to make sure we do not have to sell securities during market drops at unfavorable prices. That is why having a properly aligned portfolio allocation and financial plan is crucial.

In many cases, you will note a number of investment changes from last quarter. That reconciles with our investment philosophy of rebalancing portfolios during market swings. As we have long espoused, we should be buyers of assets as they are declining in price. Successful investing is predicated on having a sound strategy and the fortitude and discipline to implement it.

The opinions voiced in this letter are for general information only and are not intended to provide specific advice or recommendations for any individual. All performance referenced is historical and is no guarantee of future results. The economic forecasts set forth in this printing may not develop as predicted and there can be no guarantee that strategies promoted will be successful. Stock investing involves risks, including loss of principal. Bond values will decline as interest rates rise and bonds are subject to availability and changes in price. There is no guarantee that a diversified portfolio will enhance overall return or outperform a non-diversified portfolio. Diversification does not protect against market risk.